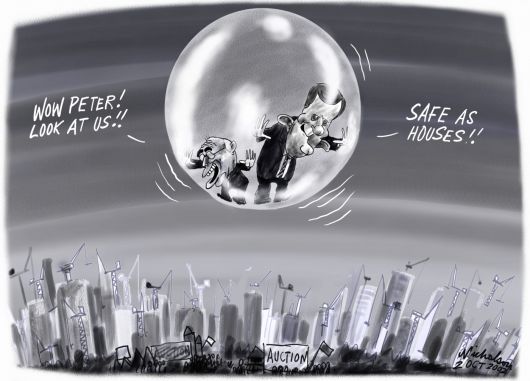 By the way, while we’re on the uselessness of politicians, although former Prime Minister John Howard and his Treasurer Peter Costello obviously hate each other’s guts, they still do come together to sing each other’s praises on economic management during the Liberal Party’s term of office from 1996 to 2007.

Let’s get a couple of things straight. They presided over the greatest property bubble in Australia’s history, bigger than anywhere in the world – and did absolutely nothing about it.  It was bigger than the bubble so well described in Michael Cannon’s “The Land Boomers” of the 1880s, and bigger than the enormous mid-1920s property boom that directed us into the Great Depression. Good economic management?!

Why does George Orwell’s “Big Brother” spring to mind? White is black, and black is white: Howard and Costello got the economy right!

Mind you, since 2007 the Labour Party also seems to have believed it’s their duty to keep the bubble inflated. In October 2008 they introduced the $7000 ‘first home owner boost’ on top of the already-existing $7000 first home buyers’ grant. Of course, the grant was immediately sucked up into increased land prices, lining the pockets of sellers, not buyers, and creating a new record real estate sales turnover of $327.4 billion in financial year 2010.

Of course, when the bubble bursts Howard and Costello will be well out of the picture. How could they have possibly been responsible for it?

Short-sighted history texts will proceed to misinform future generations of Australians they were a successful political duo. That’s the thing: the media consider a lengthy term of office denotes political success. Not so. As I suggested in my 1994 report “The Recovery Myth”, giving a real estate valuer’s perspective on the economy, we can’t possibly have a genuine economic recovery until we address the repetitively negative impact of real estate bubbles on the economy.  It simply cannot be done.

Just take a peep at the bubble developed under the ‘excellent’ economic management of John Howard and Peter Costello:-

2 thoughts on “ALMOST ABBOTT AND COSTELLO”