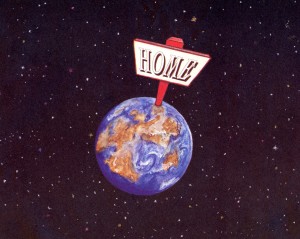 Some big questions are being asked of humanity at the end of the first decade of the twenty-first century. Many of us spent its first ten years privatising the land rent world renowned natural resource economist Mason Gaffney says the USA used to collect for government and public works in the first half of the twentieth century. Since that time, however, it has been substantially, if gradually, wound back. Australia has displayed many similarities to the Golden State which best characterised US public capture of land rent:-

“California’s natural advantages (a mixed bag) did not promote much growth after the 1849 Gold Rush and the Civil War, when California growth lagged badly for 20 years or more.  Neither did the transcontinental rail connection, completed in 1867, promote much growth.  Eventually, though, INTERNAL growth-oriented forces prevailed.  California provided superior public services of many kinds: water supply, schools and free public universities, health and mental health services, transportation, parks and recreation, and others.  It held down utility rates by regulation, coupled with resisting the temptation to overtax utilities.

That all required tax revenues.  California had oil, but did not tax severing it, and still doesn’t.  Its wine industry went virtually untaxed.  There was and is hardly any tax on its magnificent redwood timber, either for cutting it or letting it stand.  There was no charge for using falling water for power, or withdrawing water to irrigate its deserts.  Most of those are good ideas, but they are not what California did.

Its main tax source was another kind of immobile resource: ordinary real estate.  Its tax valuers focused their attention on the most immobile part of that, the land, such that by 1918, land value comprised 72% of the property tax base – and on top of that there were special assessments on land.

People and capital flooded in, for they are mobile in response to opportunities.  California became the largest state, and a major or the largest producer of many things, from farm products up to the “tertiary” services of banking, finance and insurance….

…. In 1978, California took a giant step backwards by enacting its “Proposition 13,” capping property tax rates at about 1/3 of their previous level.  The national ranking of its services began a precipitous fall; so did its per capita income.  Struggling to maintain itself, the State has raised sales and income and business taxes to unprecedented levels.  These are taxes that “shoot anything that moves,” and spare immobile resources that don’t.  The result has been the rapid “Alabamization” of California, as we have fallen to join Alabama with the worst school system in the nation.  Inmigration has changed to outmigration, and of those who stay, California has by far the largest prison population of any state, so large that the union of prison guards is now our most powerful lobby, and building prisons is our fastest-growing construction industry.  None of these people, prisoners or prison-builders or guards, are producing goods and services for others, but are not counted as unemployed, and our unemployment rate is above the national average even without them.”

Maybe California took its lead in dismantling its property-based revenues from Australia? In 1974, Prime Minister Gough Whitlam acceded to local government’s plaints to keep the lid on its naturally increasing property-based revenues by undertaking to fund half its costs out of federal taxes. In terms of making each level of government responsible for its own funding, this was a big mistake, but ceding the role of tax collector to the central government has also become state governments’ modus operandi.

Not only was the natural growth of municipal rates curbed by the Whitlam government, but the other states and the Commonwealth also quit the field of death duties after people flooded into Queensland when Premier Joh Bjelke-Petersen removed succession duties from its statute books in January 1977.  Like California, direct taxes on real estate had been minimised across Australia.

Just as Professor Gaffney stepped down from his podium in the Bahamas in July 1999, having explained California’s economic decline, Australians recommenced acceding to the dictates of their own errant tax regime, as they had in the early and late 1980s. They sallied forth again in a big way into real estate, figuring if their earnings were to be slaughtered by the tax system, why shouldn’t they rent-seek where the tax breaks are?

It may have been logical, but it wasn’t in the best interests of the nation. Since 1999, during the respective treasurerships of Peter Costello and Wayne Swan, $2.76 trillion was spent on buying Australian properties. This inflated by far the biggest uninterrupted real estate bubble in our history.  In individualistic, partly taxpayer-funded pursuits into capital gains, 29 per cent of this figure (some $800 billion) has been left exposed to the bursting of our bubble.

There remain, of course, economists who, seeing no essential difference between productive and speculative investment, still deny Australia has experienced a real estate bubble at all. Repeating what was said in California immediately before the sub-prime residential crisis burst across the nation, they insist that extraordinary prices being achieved for Australian residential real estate simply reflect a condition of undersupply. Time will similarly prove them incorrect.

Being a surplus in the production process, land rent is properly owed back equally to all Australians, but as we allowed it to be expropriated by a privileged rentier class, the gap between the ultra-wealthy and everybody else has continued to widen obscenely. Daily, we now witness social fractures developing across the PIIGS (Portugal, Ireland, Italy, Greece and Spain) as a result of allowing the rich/poor divide to grow in this fashion worldwide. Such has been the nature of thirty years of neo-liberal economics, or ‘economic rationalism’.

Land and natural resource rents are the glue that has historically bound communities and nations together, it’s literally the ‘common wealth’, and if anything was lost across the globe over the last thirty years, it was certainly a sense of social cohesion, as we jostled each other doing deals to become multi-millionaires in real estate.

But all is not lost for Australia. We have two advantages going for us: time, and the recommendations made by Ken Henry’s panel of review for ‘Australia’s Future Tax System’.

We find ourselves later in the cycle than most other countries, so, in respect of the first advantage, we would be foolish if we didn’t learn from their mistakes as they’ve bailed out banks, printed too many dollars, and imposed impossible austerity measures upon their citizenry. There’s a far better response than these.

That relates to the second item in Australia’s favour: if we have the gumption and drive to put the Henry Review’s far-sighted recommendations for the capture of land and natural resource rents into practical application, and to abolish arbitrary imposts on labour and capital, we may even now be able to work our way out of arriving at Ireland’s perilous state, a plight for which we are otherwise destined when our real estate bubble bursts soon.

The world got where it is by allowing the public’s rent to be privatised by a few. It can reverse the process by freeing up labour and capital and capturing land rent to the public purse.